Natural redheads always fascinate me. They are about to be extinct some day in the future. I want to capture their beauty before they are.
Experiment: I used the infrared technique and eliminated all colour. Asking myself: will wreckles vanish? How pale will their skin get? What happens to 'red' in infra-red?

The first part of the book are the portraits in infraRED, turn the book upside down and compare the colour photos, same sequence. 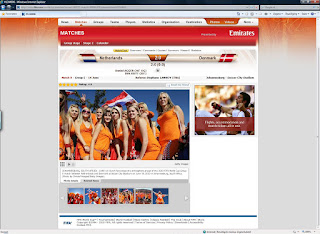 It started with a ban of the Dutch babes wearing the short, orange dresses to the stadium, as Budweiser is one of the official sponsors and Bavaria beer isn't. RESPECT to the advertising agency: it worked!!! Now everybody knows about the small Dutch beer brand LOL. (well, small, Bavaria isn't anymore but compared to Heineken it is) Heineken: eat your heart out! ;) 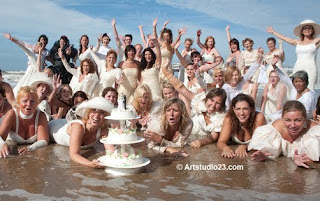 This year photographer Hans van Nunen and I will organise another mass Trash The Dress in the Netherlands. Last year, 09-09-'09 was a huge success, with our brides trashing their dresses in the Northsea, they were news worldwide :)

The Arjan van Dijkgroep will host this event on their beautiful location Fort St. Gertrudis in Geertruidenberg, NL. Party time 1-6 pm, there will be several shoots, including a high-tea-buffet and... champagne! 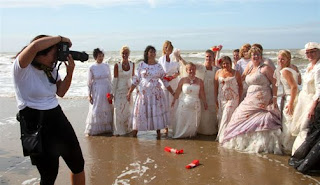 More information in this (Dutch) pressrelease. Fellow-photographers welcome, as are partners, friends and non-dressed-up people.

If you want to go to a PHOTO PARTY, this is it!
Gepost door Eyespiration - Melanie Rijkers op 15:05 2 opmerkingen: