As you probably already know, I am a huge fan of natural redheads. They are so beautiful! In 2007 I got contaminated with the Ginger virus by Bart Rouwenhorst's first redhead day in Breda.

Early 2007 I made a series of commercial photos to help Bart to promote the redhead day later that year. Next to the photo of him lying down covered with the hair of 11 gordeous redheads, I did a first try out with the Red-On-Red concept. I was stunned by the results, it really works great!

1 September 2007 I was able to take over a 100 portraits during the event. I had no idea that I'd get so much reactions to my work, like: "you can't wear red as a redhead" but also: "because of your photo from now on I'll be proud of my red hair"...

I chose Red-On-Red as it's an abundance of the most beautiful colour in the world: red. Drs. Tim Wentel even mentioned my series in his lectures during the redhead days of 2012! Stating that in this way "the red comes out best" ... Yes, he really said it, and illustrated his words with my photos. At the exact same moment I was taking portraits off-festival, in the Huis of Beelcultuur in the Reigerstraat. I created 'Half' and, by request: new Red-On-Red portraits! 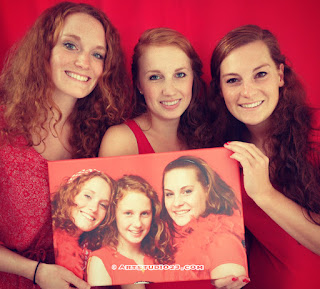 It was really cool to create new portraits of the (same) redheads, amazing they keep getting back to have their picture taken, by me! I love you all!!

In 2008 more photographers were asked to come and shoot TFP. Lucky for us we had a spot inside, as the weather was very bad.

My partner Hans and I created 'Medusa', portraits of natural redheads with long hair, laying down, so we could transform the hair into shapes, art.

The 2007 Red-On-Red photos couldn't be part of the art exhibition in the Grote Kerk though, so we printed some and showed these at the temporary studio that day.

In 2009 we were too busy with our own event, Trash The Dress, "99+ Brides running into the sea", so we had to skip the redhead days. 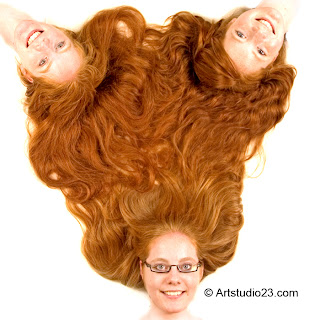 
In the end of 2009 I made infraRED, a series of Black&White portraits of redheads. A lot of models returned to our studio and were quite happy not the be in the crowd, waiting, but were able to come in by appointment and pose in a very relaxed way.


InfraRED has two front covers and no real back. Halfway through the book you'll have to flip it, as the B&W pics stop and the original colour photos begin, but these are upside down. All models are in the book twice, once in B&W, once in colour. I used the infrared technique to get 'under' their skin, so does infrared light really make wreckles dissapear? Another question was 'Is it obvious the models are redheads when you look at the B&W photos?"

I had a fab time, meeting a lot of my earlier models again, also the book infraRED is the biggest size book I ever made with redhead portraits.

After having discoverd my old Polaroid camera again, I wanted to experiment  with instant film (old and new Polaroid/Impossible Project film), with slidefilm cross process developed, and with my D700 Nikon camera. Which technique will show off the red colour of the hair best?

Fair is fair: digitaal wins, on all counts. Polaroid pics aren't bright at all, they lack colour and the once so very special 'bright coloured' cross processed analog film, well... it wasn't so special anymore. It just didn't do the trick.


And how lucky I was to get the redhead twin Anne & Malou finally to pose for me, and they are so right being on the cover of my 2011 photobook 'Red'. By their duo photos I was inspired to create 'Half', portraits of half redheads chopped in 'half', with their front & back in one photo.

Five years after my first redhead day, it's done, and I am ready to stop my search for special redhead portraits ...But like Sean Connery says, I might as well 'Never Say Never' ;)

There's one more thing, when being in Amsterdam in 2010 I again noticed the letters iAmsterdam. Tourists just love to pose with them. So ever since I figured: we need sort of same spot in my city too. Being the host of such a great event, 3500+ redheads who promote the city...don't you just want them all to pose with BREDA???

SPIRITUS portrait - would you like one yourself? Melanie is in SF often and can be booked by appointment to create your own SPIRITUS memory portrait. Bookings/inquiries: info@artstudio23.com
Gepost door Eyespiration - Melanie Rijkers op 02:57 Geen opmerkingen: